Puerto Vallarta, Mexico – Mexico has a number of Fiestas Patrias, and the one coming up next is the celebration of the anniversary of the Mexican Revolution. Although Mexico’s Revolution began November 20th, 1910, it’s now officially celebrated on the third Monday of November, which in 2019 falls on the 18th.

What began as an uprising against longtime dictator Porfirio Diaz, who resigned and left the country in 1911, the Mexican Revolution was a period of change for the people of Mexico. But the abdication of Porfirio Diaz did not usher in an era of peace and prosperity. The armed struggle lasted for the better part of a decade until around 1920. 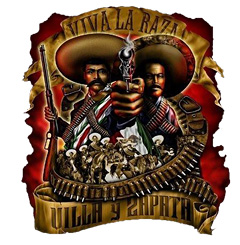 But it eventually ended dictatorship in Mexico and established a constitutional republic. A principal legacy of the Revolution is the current Mexican Constitution, drafted in 1917 in the city of Queretaro, under the leadership of Venustiano Carranza. It’s still in use today, albeit with many amendments.

A number of groups, led by revolutionaries including Francisco Madero, Pascual Orozco, Pancho Villa and Emiliano Zapata, participated in the long and costly conflict. Though Francisco I. Madero started the Revolution, and later became president, the two most colorful revolutionary leaders were Pancho Villa, the “Centaur of the North,” and Emiliano Zapata, leader of the “Liberation Army of the South.” They’ve also made the deepest impression on the Mexican people.

Throughout Mexico, there are streets and monuments named for the various heroes of the Mexican Revolution, principally Madero, Zapata, Villa and Carranza, and Mexican schools teach its importance. It’s a key part of Mexican national identity, and a time to remember and enjoy the freedom that was brought about by Mexico’s revolutionaries.

Thus, El Día de la Revolución is a time of celebration with music, (especially Mariachi, which became the symbol of the Revolution because it represented the national spirit of the indigenous Mexican blood,) parades, and cultural activities in cities throughout Mexico.

As we celebrate the National Holiday here in Puerto Vallarta, banks, government offices and about half of the businesses in town will be closed on Monday, November 18th. Most people will have the day off from work so they can enjoy a long weekend of fiestas, and the parade that winds through El Centro.

We wish all of our readers, wherever they may be, a happy Mexican Revolution Day!