Nuevo Vallarta, Nayarit, Mexico – The Riviera Nayarit will host the North American Optimist Championship in its 2021 edition, to be held from May 29 to June 5 at the Vallarta Yacht Club (VYC) in Nuevo Vallarta.

Marc Murphy, managing director of the Riviera Nayarit Convention and Visitors Bureau, said this would be the fourth time the nautical event is held in Riviera Nayarit and organized by the VYC with the Paradise Village in Nuevo Vallarta as its host hotel. 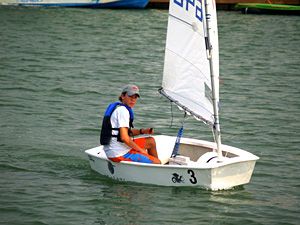 “I would like to congratulate the members of the Vallarta Yacht Club for their enthusiasm and constant focus in organizing events that attract visitors to this destination, also known as Mexico’s Pacific Treasure,” he said.

Linda Green, co-president of the event, explained the Vallarta Yacht Club is working closely with the Mexican Sailing Federation and the IODA to ensure this competition – composed of young high-performance athletes (11 to 15 years old) – is carried out following the highest standards of quality and safety.

“We expect at least 150 competitors to visit the Riviera Nayarit, but many of these athletes will be traveling with their families and friends, so we will welcome the competitors, their families, and race officials from countries such as New Zealand, Australia, Japan, England, the United States, Canada and many South American countries,” he explained.

In total, 500 visitors are expected to be directly involved with the event; and as it is a continental championship, it will be supported by the IODA micro website, so world-wide media coverage is expected.

However, as it is a massive event, it is important to touch on the topic of Covid-19. Regarding this, Linda Green pointed out that work is already underway to establish strict health protocols during the event, and she referenced the Optimist 2020 European Championship, which was held in Slovenia in October last year, where health and safety protocols were implemented for more than 250 competitors.

The Optimist Sailing class is one of the preferred classes to teach new generations how to sail. Approximately 80% of all Olympic Sailing athletes started their career in the Optimist. The boats used in this class are known as single-handed or one-man boats, allowing youngsters gain more confidence and develop their skills.

The Riviera Nayarit Convention and Visitors Bureau (CVB) and the Bahía de Banderas Hotel and Motel Association (AHMBB) support events as they generate visitors and excellent exposure thanks to their media coverage. The activities take place with the support of the Government of the State of Nayarit via its Tourism Promotion Trust (Fiprotur).