The Polish Museum of Puerto Vallarta

Mexico City – Puerto Vallarta, in the wide Bay of Banderas, is mainly known for its sandy Pacific beaches, all-inclusive family resorts, and gay nightlife. Once a tiny elite port hosting the likes of Robert Redford and Elizabeth Taylor, it is now the country’s most important beach destination after Cancún: a port of charming white buildings and red-tiled roofs made famous by the 1964 film The Night of the Iguana.

But the city is also a small cultural hotspot, with galleries selling decorative pieces, mostly high-end Mexican handicrafts, and kitsch paintings and sculptures by local artists aimed at retired American and Canadian expats, and the high volume of cruise ship traffic that called there before the pandemic.

Among all this lowbrow fare, one gallery, located a couple of blocks from the city’s boardwalk, stands out for its modern design: a little treasure shop called Posters International. Owned by Martin Rosenberg, 72, it hosts one the largest collections of Polish postwar posters in the world. These graphic design masterworks include pieces by Henryk Tomaszewski, Roman Cieslewicz, Jan Lenica, and Franciszek Starowieyski, members of the Polish school of posters, as influential in global design as its Cuban counterparts.

Born in Brooklyn in 1942 to descendants of Russian and Polish Jews who fled pogroms in the 1920s, Rosenberg’s mania for collecting started early: “I was an only child, so I played alone most of the time: Collecting stamps was a way to entertain myself,” he told me.

Rosenberg’s father was a welder who repaired battleships in the shipyard during the war and later became a carpet salesman for E.J. Korvettes in Queens, where the family moved. After studying anthropology at Arizona State University in Tempe and at New York University, Rosenberg eventually left his intellectual calling to find work at the American Institute of Certified Public Accountants, becoming CEO of the organization’s Illinois chapter. 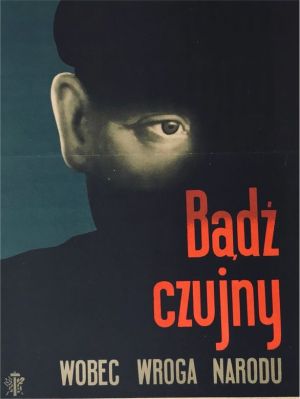 But his thirst for collecting was never quenched: He bought antiques, Chinese porcelain, and bronze sculptures before eventually turning his attention to vintage posters: “I thought, maybe I could discover an area of poster collecting that an archaeologist could appreciate. What could I find that others had not?”

As Rosenberg learned, the most famous poster schools in Europe – the French, Swiss, Italian or Danish schools of the late-19th and early-20th centuries – while groundbreaking, sophisticated, and influential, had produced thousands of copies of each piece, weakening their collectability.

In 1978, a year before the breakout of the anti-Soviet Polish Solidarity movement, he found what he now calls his collecting mission. He asked the saleswoman of a vintage poster store in San Francisco for something unique, and she took him to a back room and drew from an old filing cabinet a series of Polish posters.

Rosenberg was immediately impressed by their unique design.

Pieces from the Polish school of posters were scarce: From the end of the war until the late 1980s, the communist state maintained a strict censorship policy that monopolized the distribution and commissioning of printed media in Poland, and resources such as paper and ink were hard to come by. Posters that were bought and sold in the West were either smuggled out of the country or sold directly by the government, which made them rare.

And although the texts on the posters were censored, the design was not. Many posters were made to promote imported American films. The communist state required local artists to make them, and the artists often found ways to add their own oblique but powerful commentaries and veiled critiques of Polish history and life under the communist regime.

As a result, a form of public social discourse, which Rosenberg compares to Mexican muralism, yet mass produced, emerged. Posters transmitted the spirit of the Western film classics being shown – from Gone with the Wind to A Clockwork Orange – while also commenting on Polish society in dark and satirical ways. Polish artists also announced theater, music, jazz, opera, dance, sports, and circus events, as well as exhibitions. They designed for political parties, advertised products, and commemorated historical events such as the Warsaw Ghetto uprising.

At the time of his discovery of the rich vein of art, Rosenberg was living in Chicago, home to one of the largest Polish communities in the world, and it was there that he met Krzysztof Dydo, the owner of a poster gallery in Krakow.

Drawn by his new passion, Rosenberg took biweekly Polish classes and started to visit the country every year from 1979 to 1990 to build a network of relationships, often meeting the artists themselves. Eventually, in 1981, he established a small gallery, run by local art students who realized the importance of the collection.

After the collapse of the Soviet Union in 1990, Rosenberg brought the first major exhibition of Polish posters in the United States to the Polish Museum of America in Chicago.

Works from his collection have also appeared in exhibitions at the Museum of Modern Art in New York.

Rosenberg retired in 2000 and decided to dedicate his life to promoting his collection, which at its peak numbered 10,000 posters. He moved it to Santa Fe, New Mexico, and then to San Miguel de Allende, Mexico, also a destination for American retirees, in 2010. His gallery was located downtown and became well known, especially among younger crowds: “My best customers are graphic and web designers,” he told me, “drawn to vintage items, who realize the uniqueness of the pieces.”

Eventually, he moved, along with his collection and his partner, to Puerto Vallarta four years ago to get closer to the sea.

Alan Grabinsky is a freelance writer and journalist based in Mexico City, covering Jewish life and urban issues for international media.