Puerto Vallarta, Mexico – Attention All Music Lovers! The Puerto Vallarta Chamber Orchestra (PVCO) and Instituto de Artes Musicales Puerto Vallarta (IAMPV) will be adding some extra joy to the holidays through a series of special concerts that are sure to make the season a little brighter.

First up is El Ascenso de Salty Paw (The Rise of Salty Paw), a two-hour concert to be performed by the Salty Paw Jazz Orchestra, Puerto Vallarta’s first and only youth-based jazz orchestra, on Sunday, December 8, 2019 at 5:00 pm at the Cuale Cultural Center. 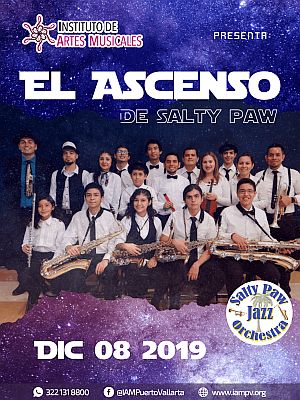 From their first concert in 2016, “The Jazz Awakens,” up to “The Rise of Salty Paw” three years later; just like Star Wars, this new generation of jazz musicians has learned to use their version of “The Force” (Improvisation) to play jazz.

Speaking of ‘Star Wars,’ in this concert, the Salty Paws will be playing the movie’s theme song in a jazzy style; Big Band swing standards like Sing, Sing, Sing and In the Mood; along with some Blues, Funk and Samba and, of course, favorite holiday tunes, like Feliz Navidad.

Make plans now to celebrate the Holidays and Star Wars with your family and friends while dancing to Big Band Jazz music by the Salty Paw Jazz Orchestra. Tickets with prices ranging from $50-150 pesos, may be purchased online at iampv.org or at the door on the night of the concert.

What started out as an intercultural cross-generational project, with its first rehearsals in 2004 and premiere concert in 2005, the PVCO has steadily grown to the size of a full orchestra with over 40 members, including expatriates, professionals and advanced students from eight different countries.

Since the ensemble’s inception, the Puerto Vallarta Chamber Orchestra’s holiday concerts have become an annual tradition for many residents and seasonal visitors. This year the orchestra, led by Conductor Daniel Oliveros, is teaming up with Latin group “Tajín” to offer a different kind of Christmas concert.

The two PVCO holiday concerts start at 7:00 pm. Tickets, which cost $200 pesos general admission and $80 pesos kids and students, may be purchased online at iampv.org or at Thomas Simon Salon, Venustiano Carranza #290 on the south side of Vallarta. The American School is located at Albatros 129 in Marina Vallarta, and Salon Paraiso is at Paseo de los Cocoteros No.13, Las Jarretaderas, Nuevo Vallarta.

For more information about the concerts, IAMPV programs or how you can help, call 322-131-8800 or visit the Instituto de Artes Musicales Puerto Vallarta website or Facebook page.