Puerto Vallarta, Mexico – The stairs that lead down to La Isla Rio Cuale from the north-bound bridge over the river in El Centro, which were removed several years ago due to infrastructure damage, are being replaced with municipal resources to the tune of almost 2 million pesos.

Mayor Arturo Dávalos Peña explained that, rather than stairs, a wheelchair and pedestrian-friendly ramp is being built to guarantee that everyone can visit the island. 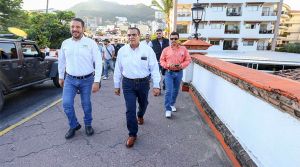 He said that 1,993,104 pesos of the Municipal ICUS Fund were allocated for this important infrastructure project that’s being built in response to the need for universal access to the Isla Rio Cuale.

Dávalos Peña confirmed that work is being carried out in a timely manner on this project, which consists of a steel-reinforced concrete ramp with a slope of 4 to 6 degrees on average, handrails and night lighting on the outer edges, as well as a masonry wall on the river bank and other safety measures.

He went on to say that this new infrastructure project will undoubtedly strengthen the local economy as well as tourism in this area of Puerto Vallarta.

Press release translated and edited by María Francesca for BanderasNews.com.