Santa Maria, California – Julián Castro, former San Antonio mayor, announced his candidacy for the US presidency in both English and Spanish. “Yo soy candidato para presidente de Estados Unidos” would not be surprising, considering his name. In fact, Castro’s Spanish is quite weak, as he himself has admitted a number of times.

Speaking the language of one’s ancestors is not required for candidates who trace their origin to other ethnic groups. In the case of Latino candidates, it’s viewed as a basic requirement. Several of Castro’s competitors for the Democratic nomination, however, are in fact bilingual.

Beto O’Rourke and Corey Booker speak acceptable if not excellent Spanish. Pete Buttigieg also speaks Spanish as well as a number of other languages, including Norwegian, French, Italian, Maltese, Arabic, and Dari, with varying degrees of fluency.

If Anglo candidates speak foreign languages, we view it as a plus. If a Latino candidate speaks Spanish, it is considered a must. If someone like Castro does not speak it, or speaks with significant limitations, it’s viewed as lacking in basic skills. No one would expect Donald Trump to speak German because his grandfather was from Germany. Like Castro, the current president is a third generation American (second on his mother’s side who was born in Scotland).

When immigrants come to the US from non-English speaking countries they struggle to learn the dominant language. As a result, integration becomes difficult because of a number of factors, particularly the mastery of the new language. 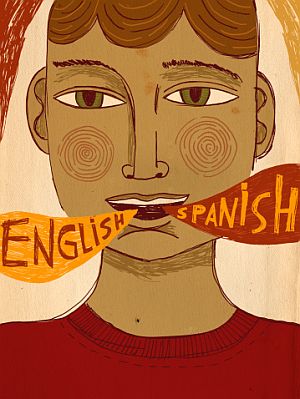 Learning English can be very difficult especially for those coming to the US as adults because of the language’s complexities but also because of lack of time and limited education in the immigrants’ native language. Although the foreign language may be spoken at home, kids of immigrant parents are often encouraged to focus on English, which is viewed justifiably as the passport to integration and the door to opportunities in the new country.

Speaking a foreign language, like Spanish, can often be viewed with skepticism and mockery. It was not unusual for immigrant schoolkids to be reprimanded or even punished for speaking their parents’ language instead of English. The second generation is often still linked to the parents’ language and culture but English and American culture become dominant.

Sometimes even the second generation can barely communicate in the parents’ language. I have first cousins whose parents were born in Italy and they barely know the basic rudiments of Italian. The parents’ culture also begins to take second place. Love of soccer is often replaced by traditional American sports such as football, basketball, or baseball.

If the second generation retains a bit of the parents’ language, the third generation typically loses it completely. The grandchildren of immigrants may retain some cultural traits from their grandparents, such as cuisine and some other customs, but in fact the language and customs from the old country fade and are replaced by American ones.

Castro is no different from other third generation Americans. Born in the US, educated in English in elementary and high school, he later completed a BA degree at Stanford University and eventually a law degree at Harvard. An American success story achieved, of course, with the language of the country – English.

Yet, his name ties him to the Spanish language, because Latinos are supposed to know Spanish in the mind of many Americans. This is due in part to the importance of the Spanish language in the US. There are more than 41 million Spanish speakers in the US. About 65 percent of them also speak English at various degrees of fluency.

If the US were a Spanish-speaking country, it would rank as number four after Mexico (121 million), Colombia (48 million), and Spain (46 million). Spanish in the United States is thus in a different position from other immigrant languages for its numbers but also for historical reasons.

Presidential candidates find Spanish a useful language to reach Latino voters. Although some Latinos may view an Anglo candidate using Spanish as pandering, typically speaking Spanish during a campaign is beneficial. George W. Bush used his very limited Spanish to his advantage, gaining about 40% of the Latino vote in the 2004 presidential election, an excellent result for a Republican.

Castro’s limited knowledge of Spanish will have little effect in winning the Democratic nomination. Yet, the belief that his last name requires him to know Spanish is another stumbling block minority candidates have to overcome. In the case of Barack Obama, the fact that his father was born in Kenya put into question his citizenship in spite of the fact that the 44th president was born in Hawaii.

If Castro does not win the nomination, he could have a good chance as vice presidential candidate. In the meanwhile, he is improving his Spanish. Knowledge of this language is not indispensable, but certainly useful, not just in politics but to identify who people are. Castro’s kids, fourth generation Americans, are being educated in both English and Spanish. A positive move not for future political gains but to demonstrate that you can be more fully American if you know the language of your ancestors.

Domenico Maceri, PhD, is emeritus professor of romance languages at Allan Hancock College, Santa Maria, California. He is the author of a book on Pirandello, one on Spanish grammar, and another on Italian grammar. He has also published a number of articles in newspapers and magazines around the world, some of which have won awards from the National Association of Hispanic Publications.