Puerto Vallarta, Mexico – James R. Callan, a part-time resident of Puerto Vallarta and long-time member of the PV Writer’s Group, has just released his latest book, A Plot for Murder. Packed with suspense, this riveting whodunit will have readers on the edge of their seats.

After a successful career in mathematics and computer science, receiving grants from the National Science Foundation and NASA, and being listed in Who’s Who in Computer Science and Two Thousand Notable Americans, Mr. Callan turned to his first love – writing. He has had four non-fiction books published. He now concentrates on his favorite genre, mystery/suspense, and A Plot for Murder is his ninth published work of fiction.

Synopsis: A Plot for Murder, A Father Frank Mystery 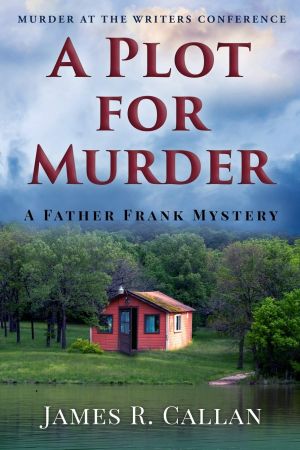 Rod Granet, award-winning novelist and womanizer, is the main speaker at a writers conference. But after the opening session and in front of a crowd, Maggie DeLuca, Father Frank’s sister, accuses Granet of stealing her story and says he will pay for it.

That night, Granet is killed.

The sheriff quickly zeros in on Maggie and she is hauled off in handcuffs. When Father Frank comes to her aid, the sheriff threatens him with jail if he interferes.

A Texas Ranger is assigned to the investigation. Soon he sees Father Frank as a valuable asset.

Can Father Frank stay out of jail and alive, long enough to find the real killer?

There’s one sure way to find out – get your copy of ‘A Plot for Murder’ today! Digital copies are available on Amazon.com for just $4.91, an 67% discount, for a limited time. Paperback editions are also available from Amazon for $14.95 USD.

“From the first sentence, it captures your attention and carries you on an intriguing mystery-solving adventure,” Avid reader Sharon S.

In addition to writing, Callan also speaks at writing conferences and teaches writing workshops in Texas and Mexico. He and his wife split their time between homes in northeast Texas and Puerto Vallarta, Mexico. His website, jamesrcallan.com, provides more information on his books and his work, plus a contact form to forward an email to him.

‘Rocketman’, An Elton John Tribute, Sundays at The Palm Cabaret

‘Spay-ghetti and No Balls’ Fundraiser Set for March 15