Puerto Vallarta, Mexico – Another notable piece of public art has been installed in Puerto Vallarta, but you won’t see it unless you are driving. The interior wall of the “small” tunnel that leads from the Emiliano Zapata neighborhood to the Libramiento now features a beautiful mural by Mexican artist Lucía Prudencio Núñez.

In February, Mexican visual artist Lucía Prudencio Núñez spent six nights painting twelve different species of flora endemic to the Puerto Vallarta region inside the tunnel with the support of the Sub-Directorate of Roads, which partially interrupted traffic to expedite the work in progress. 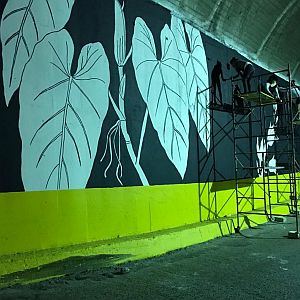 The mural is part of the large-format public spaces intervention program undertaken by the Municipal Government through a Vallartense Institute of Culture (IVC) initiative which, to date, has rendered two murals in the Historic Center of the city.

“At the IVC we think it is very important to rescue these spaces and transform them into large canvases,” IVC director Marina de los Santos Álvarez said. “Urban art is increasingly present in large cities, conquering people from various sectors and social classes, uniting people and giving them a sense of belonging to society, while democratizing art and humanizing public spaces,” she added.

The artist, Lucía Prudencio Núñez (Mexico City, 1984) has a degree in Plastic Arts from the National School of Painting, Sculpture and Engraving “La Esmeralda,” and currently resides in Xalapa, Veracruz. Specializing in graphics, the high contrast mural on the tunnel wall demonstrates the influence that engraving and graphics give to her work.

The mural’s design was not based on the artist’s whim, but on the needs of the space and the idea of betting on local identity. “It was based on a previous investigation of the local flora,” said Prudencio Núñez, who explained that there are approximately 12 different species of native plants on the tunnel’s wall. The mural combines separate elements to clearly and effectively communicate the whole image, taking into account that it can only be viewed by those driving through the tunnel.

A group of Graphic Design students from the University of Guadalajara’s Centro Universitario de la Costa (CUCosta) actively participated as the artist’s assistants.

The tunnel mural adds to the urban art works recently produced by the IVC, including one on the corner of Abasolo and Juárez created by muralist Misael López, and a mural in the 20 de Noviembre Elementary School by multimedia artist Jupiterfab.

The IVC invites resident and visiting citizens to learn about the different artistic works that bring life to the city and beautify everyday spaces.